Here's my review for the Asia Exclusive, Voyager class Generation 2 Tank Megatron. As you can see from the figure it is a remold of the ROTF Bludgeon. 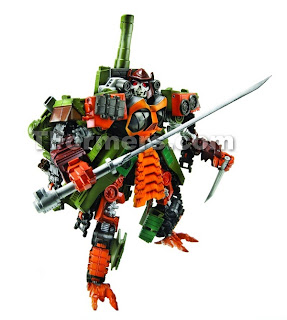 any how.. from my point of view.. i kinda like the deluxe class version of the G2 tank megatron (just hoping maketoys could provide him with some upgrades like the battle tanker optimus). also i find his face mold. . a little disturbing .__.".. it's like the expression "Prepare Your Anus" ._.

bright side is that .. the tank mode is pretty neat.. and lovin the design of the tank.
but the colors.. is kinda bright green :L..


which is why.. i decided to give him some weathering touch ups

Used acrylic black and some brown. and also little silver as well

at least it looks more like a tank.. instead on leaving it bright green.. :L

now for his robot form.. the 3 things that kills that figure
the Long sword, Knife and the Rape face .__."

the figure is actually not that bad.. but he just need a new face mold.. and solid weapons :L

well for the safety of little children, Hasbro would use soft plastic.. which sometimes.. gets bend when put it into the tank's nose... :L.. .solution is Warm Water... but i might get the Bludgeon's third party weapon.. which is more solid.. lol. hope Doctor Wu could provide a new face for this megatron. Articulations i say is around 50/100 for my taste.. which his hands could run on swivel joints.. gives it more posture.

he kinda goes well if you add RiD Arcee's gun

and thank God for the battle tanker which i bought months ago, the sword could fit with megatron's hands.. and makes it look more suitable -3-"

conclusion.
My point of view.. this is just an OKay figure.. much better than the FOC Combaticons.. seriously Hasbro.. wtf did you do to Bruticus :(.. Brawl is like the best figure out of the Combaticons. sigh*.. might as well get the Universe Combaticons+Fans project Crossfire bruticus Upgrades.

well that's about it for the figure. thanks for viewing :). gonna wait for FOC Grimlock and the other FOC figures
Posted by Unknown at 11:14 PM